As the Syed Mushtaq Ali Trophy is soon getting over, this trophy sets a stage for inaugural of Domestic Cricket.

Assam Cricket Association is not lacking behind , it announced various Cricket tournament schedule in Assam bringing in the euphoria of the spirit of Cricket into the Cricket lovers and players in the state!

The venues of the aforesaid tournaments mentioned in the Press Release is not yet out. As announced by the Assam Cricket Association:

“The venues of the final round will be notified later.”

Further, the Assam Cricket Association is also privileged to announce the inauguration of a new cricket playground and pavilion with other facilities at Numali Jalah, Amingaon, and the said cricket facility will be inaugurated by Hon’ble Dr. Himanta Biswa Sarma, Chief Minister, Assam and former President of Assam Cricket Association at 11:00 AM on 16th November, 2021.

This additional cricket facility will not only provide cricket infrastructure for the city cricketers but also help the State in organizing various domestic cricket matches.

It is pertinent to state here that BCCI, after inspection, has already approved the Numali Jalah Amingaon Cricket Ground as a recognized BCCI venue for hosting age-group and Women’s cricket Tournaments from the current season onwards and also allotted 7 matches of the BCCI U-25 Men’s State A One Day Tournament starting from 17th November, 2021.

You can have a look at the official notice below.

On Monday, 1st November 2021, a program had been organized by Keuth Society, emphasizing mainly on children welfare in Kaphara Village of Assam.

The program was organized by the Keuth society which had been formed several years ago to work for the welfare of the society and fight against any evil that would cause a disharmony among the people of the village.

At around 3 p.m., under the supervision of Mira Gaon district, the Keuth Society of Kaphara social community organized a children welfare program inside a naam ghar of Bhakat Gaon .

The program was inaugurated by Shri Biplob Saikia honorable President of Assam Jatiya Parishad (AJP) who was the Chief Guest of the program and had invested his valuable time there to make the event a success.

The main objective of the program was to make everyone aware of Keuth culture and society that is slightly perishing from the society. In order to make the joyful and entertaining, different programs were organized such as dance, skits, valuable speeches, songs etc.

All the program were based on Keuth culture to make the society more aware of the heritage, ethnicity, importance and need of this culture.

After the program Shri Biplob Saikia interacted with media where he expressed his feeling regarding the program and also gave some details regarding some social welfare programs that are to be conducted and had already been conducted in Kaphara region of Assam.

Lovina Borgohain to be appointed as A DSP- Assam cabinet

On 28th of October , The Assam cabinet has approved the State Government’s decision of appointing ace-boxer Lovina Borgohain as the Deputy Superintendent of Police.

The order decisions taken by the cabinet yesterday includes a big infra-push of Rs. 508.60 crore loan. This amount is to be raised by the Government of Assam from NABARD (National Bank for Agriculture and Rural Development) for Project sanctioned under RIDF-XXVII. Loan amount to be repaid within 7 years with a moratorium for 2 years at 2.75% interest. 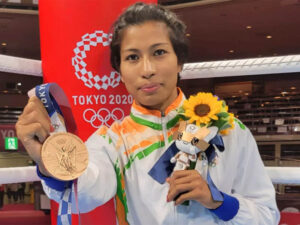 Other than this ,in term of land allotments, 2 katha land to be allotted for ‘Mising language & culture research center’.
Gogamukh, Dhemaji was set up in 2005 for the promotion & preservation of Mising language and culture.

2 Katha, 10 Lessa land to be allotted for Barpeta Zila Mahila Samity, a Non-Profit Organisation, for the welfare of women & children.

The petrol price in several District of Assam rose consecutively for 3 days. This marks the inflation rate going up in Assam. Petrol has now crossed the Rs.100 mark in many parts of Assam like the other states in India. Touching the Rs. 100 mark means the vehicle owners will now be offered less oil in return of the money they pay for it.

Price hike in terms of petrol not only effects the automobile owners but also the General public as a whole. But How?

The central government has not made any comment regarding the consecutive rise in petrol price for over years now, despite their rigorous criticism of the Congress government before 2014. The Government has to now look up to this so that a stability can be brought as soon as possible.

Note:- State-run oil refiners such as Bharat petroleum , Indian oil and Hindustan petroleum revise the fuel rates daily , by taking into account the crude oil price in international markets, and the rupee-dollar exchange rates. any changes in petrol and diesel price are implemented with effect from 6:00 a.m. everyday.

We Hope that Prices would Reduce in the Near Future and Post Covid-19 things would get better.

On 5th October 2021, a new hospital building has been inaugurated at Tirap Gate State Dispensary under Margherita subdivision for which  MLA of Margherita, Shri Bhaskar Sharma was invited as the Chief Guest for the inauguration program.

The new building is donated by Shri Haren Gogoi in the memory of his late father Jatin Gogoi. Near about 25 lakhs rupees were invested for the construction of this building which was inaugurated by Bhaskar Sharma. At the inauguration program there were almost 25-30 people who witnessed this moment along with Mr. Jatin Gogoi’s family.

Bhaskar Sharma addressed the media and the crowd and stated that the main aim of the building will be to give efficient hospital service in the smaller area near by Lekhapani locality with all the best facilities available. This would provide a greater help to the local with easy availability of help when needed.

After the inauguration program Shri Bhaskar Sharma interacted with media where he expressed his feeling regarding the building, he said that this types of development works should be done in smaller localities which helps in the development of the region as well as ensures welfare for the long run. He also thanked Shri Haren Gogoi for his quality work and efforts for the successful construction of the building.

After this Shri Haren Gogoi interacted with media and gave a brief information about the new building which stated that around 25 lakh rupees involved in the construction of the building and many new tools which were earlier not available in the hospital has been arranged which would not effect the treatment of the patients.
At last he said that in future, “We will do more selfless work which will help the society to develop more.”

Mr. Haren Gogoi also mentioned of introducing all the required latest technologies as well as x-ray machine to the new building.

The notification dated 01/10/2021 also added to the connection that the online form fillup process will initiated by 1st November 2021 and will be closed by 10th of November.

An online portal for the process will also be opened in due time regarding which the institutions need to notified before the process take place.

The controller of examination has urged all the head of institutions coming under the jurisdiction of the council , through the issue notification to notify the student about the same so that the process is carried out smoothly with no one being left out within the given period.

In this year Assam higher secondary education council (AHSEC) cancelled the the final year examination in July, as a situation was not suitable for conduction of exam due rapid spread of covid in Assam.

The notification issued by the the higher secondary education council is given below:-

The SOP focuses on the importance of vaccination and bans any kind of fair either within the premises or standalone including any kind of cultural activity.

• All Puja Committee Member will have to submit Proof of Vaccination (1 dose compulsory). While Taking permission for organizing festivals from Deputy commissioner.

• Puja Mandaps have to be орen on all sides and spacious and social distance is mandatory. All Mandaps should have separate entry and exits.

• On various day of Puja the members of the committee who are associated with Puja will be tested for covid-19. Further they will be again tested after Dashami i.e. the tenth day.

• On Visarjan day the DCs of the respective districts will notify the Puja committe. No gathering allowed.

• Curfew will remain in force from 9 pm until further notice. Further, the Puja rituals should be completed in the stipulated time frame.

• The statues should not be too large and no cultural programmes will be allowed. Citizens below 18 years are exempted from these protocols.