Loading...
Skip to content
Trending
Lovina Borgohain to be appointed as A DSP- Assam cabinet
16 Killed In a Road Accident In Nadia, West Bengal
Bollywood Actor Sanjay Dutt Will Be The Brand Ambassador Of Arunachal Pradesh
New Important Updates for Assam HS Students: 2021-22 session
Deadly Fire Breaks Out In Margherita’s Dibong Fakiyal Burning Down A House
CM Himanta Biswa Sarma declared Bodo language to be introduced for Class XI, XII in selected schools in Assam: Know here!
Lakhs of rupees seized from the house of a dried fish seller in Ledo
Mandatory use of INDIAN MUSIC as vehicle horn be made a law: Nitin Gadkari
AHSEC 2021-22: New updates on Final Year Examination
Sahara India Office of Digboi Branch in CHAOS: Customers demanding their MONEY!
Home » Coal Hidden And Transported With A Bolero Pik-Up Seized By Digboi Forest Department 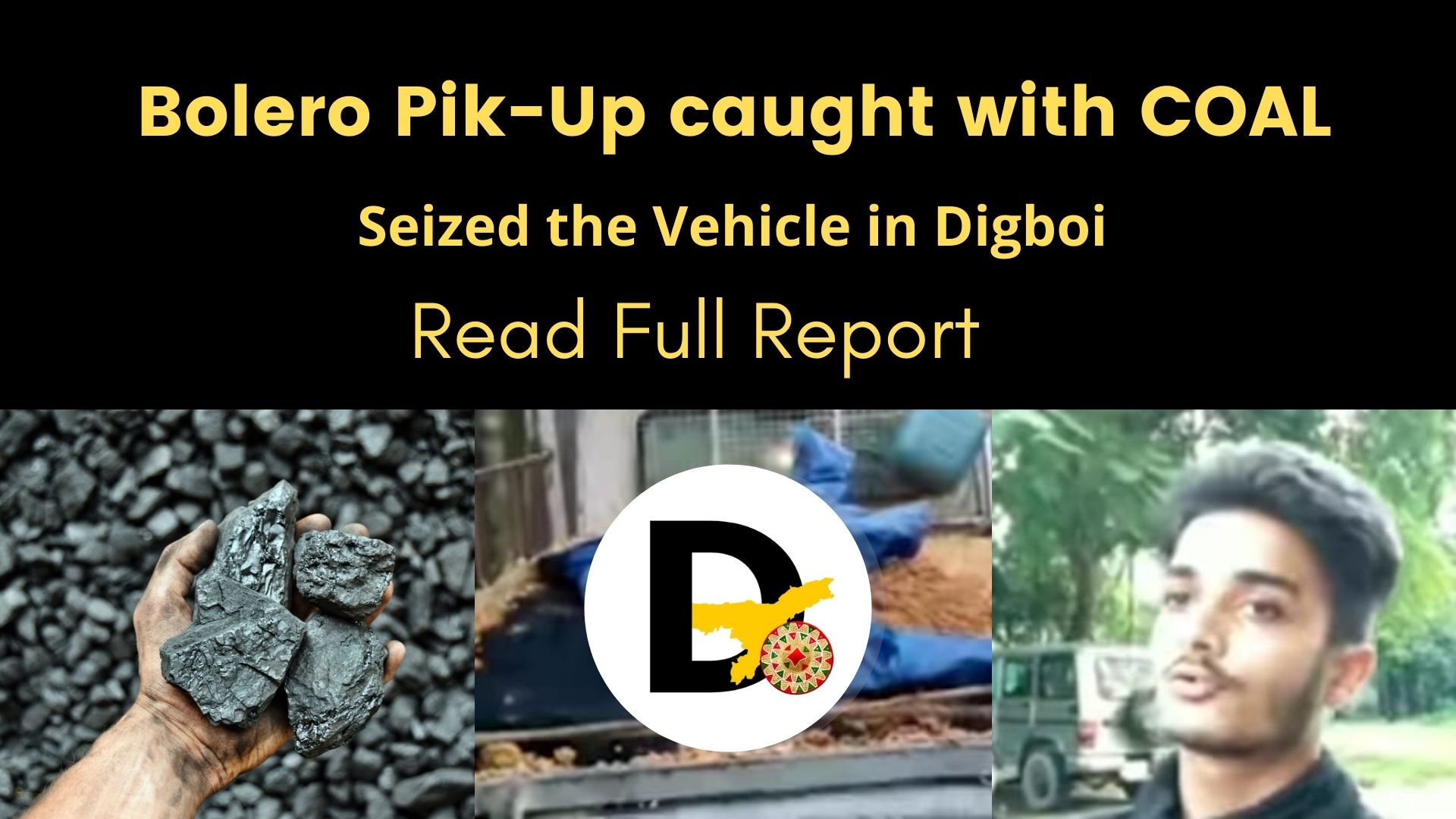 On the morning of 13th October 2021, at around 10 am a pik-up was seized by the Digboi Forest Department which was loaded with coal and covered with a layer of soil to cover the coal that was being transported through illegal means.

According to information the pik-up with registration number AS23CC0402 was seized at the morning as it seemed suspicious but the officials couldn’t do an instant investigation as there was another urgent case of elephant’s uproar in nearby area. However, after the official’s returned they continued the investigation and found a huge amount of coal being covered with dry soil. After which they kept the vehicle for further investigation of the matter.

When the owner of the vehicle, Mr. Tasif Khan, from Margherita, was being asked about the matter he said ” I don’t know anything about the matter and I just came after my driver called me to come over and take back the vehicle that has been taken in at Digboi, which was loaded with soil. But after I came here I am unable to connect through my driver in person as well as through call.” When the media asked about the drivers information he said “My driver’s name is Jaani and he is from Dirok. He has been working for me for a month. Today he took my vehicle saying that he had an order of transporting soil to a place but the vehicle was taken in and I had no idea about the matter until I arrived in this place and saw the pik-up filled with coal and being covered with a layer of soil.” After he was asked if they had any dealings of transferring coal through illegal means he readily denied it and said that he and his family never had any dealing or business of transferring coal.

The media then went to the officer who caught the truck and asked him about the case to which he explained ” At first when I saw the dry soil in the vehicle I had a slight doubt as mainly the soil that had been dug out is basically moist and soil that is transported from Margherita is mainly sandy. When we came back after an urgent matter and checked it we found that, a huge amount of coal was being hidden under the soil so we kept the vehicle. From the outlook of the matter it is for sure that the coal was stolen and was to be transported by illegal means. Now the further investigation will be done by the other officials in-charge of the matter.”

When asked about the driver to the officer he said ” As the pik-up when caught was loaded with a layer of soil so we couldn’t charge the driver at that moment. When after the investigation the driver was being called, the owner of the vehicle showed up along with many people.” when asked to him about the things that the people said, he replied that the people asked him to give the vehicle and take as much amount as he wanted but he denied it and said that it was his duty and to pay the revenue that is needed to be paid to the government to take away the vehicle and follow the procedure.